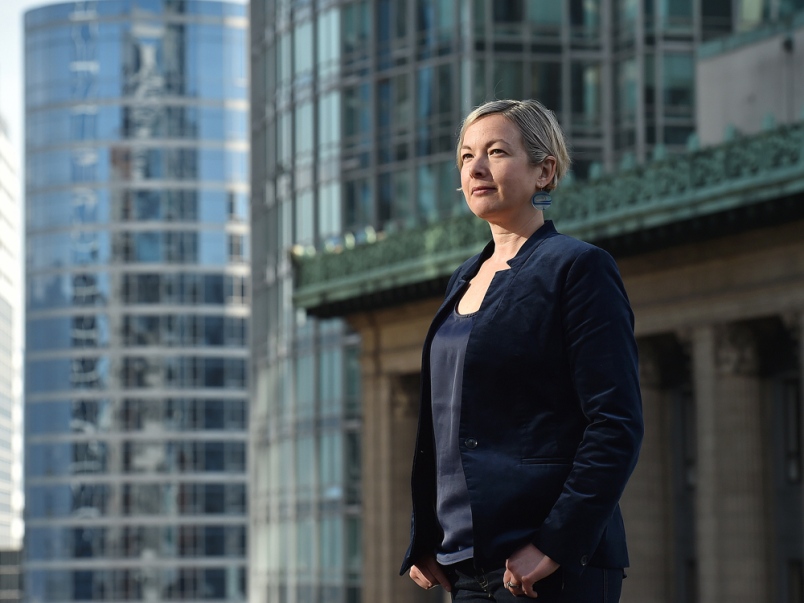 Kathryn Wilder counts herself lucky when it comes to finding affordable housing in Vancouver. But it was only by chance. In late 2016, she and her daughter were helping her ex-husband, a senior citizen, find a place to live after he was released from a month-and-a-half-long stay in hospital. He had few resources, wasn’t aware of options, wasn’t comfortable using a computer, and had nowhere to go.

During the search, they came across Brightside Community Homes Foundation, a Vancouver non-profit affordable housing society that owns and operates 27 buildings, which provide 950 homes to more than 1,000 seniors, families and people with disabilities. Applicants qualify through income testing.

The society accepted Wilder’s ex-husband into one of its buildings, although he died not long after moving in. Wilder, now 74, also applied for housing through Brightside on the advice of her daughter.

She was paying $1,900 a month for a West End apartment she’d lived in for 25 years, which she wouldn’t be able to afford much longer due to her limited income, especially with annual rent increases.
Wilder’s application was also accepted and, for the past year, she’s lived in a Brightside building in South Granville.  She describes her apartment as a “gift” and compares it to winning the lotto.

“It enables me to live,” she said.

Wilder hopes others suffering through the affordability crisis find homes too.

She’ll be speaking about her housing experience at an Oct. 9 event Brightside is hosting at the Vancouver Public Library.

Called, “YIMBYism: A solution to Vancouver’s Affordable Housing Crisis,” its objective is to bring people from diverse backgrounds — housing experts, residents and other interest groups — into one room to discuss housing “challenges and innovative solutions.”

During her talk, Wilder hopes to shed light on how tough it was for her and her ex-husband to find affordable homes.

“I was born in North Vancouver, but I’ve lived in Vancouver for the last 40 years. This is my home, but I wouldn’t have been able to stay here. And I’m only one of, who knows, thousands I’m sure.”

Carolina Ibarra, Brightside’s director of strategic initiatives and special projects, maintains the city needs to take a collective approach to dealing with the housing affordability problem.

“We need to adopt a YIMBYism approach, which means ‘Yes in my backyard’ if we’re to provide affordable housing for people of all income levels and all ages,” she said.

Ibarra said Brightside, as an affordable housing provider, is in a unique position to foster that approach because the society deals with many of those involved in the housing field, including residents, landlords and community-based organizations.

“We hear different parts of the story but I don’t know if the city as a whole is looking at the issue through the eyes of every stakeholder,” she said. “We really think we need to take a collective and comprehensive approach to how we look at addressing the affordable housing issue.”

Aside from Wilder, speakers at the Oct. 9 forum include representatives from the United Church and the Community Land Trust Foundation of B.C., while panelists include LandlordBC’s David Hutniak, Jill Atkey of the BC Non-profit Housing Association, West End MLA Spencer Chandra Herbert, Kira Gerwing from Vancity Credit Union and Robert Brown of Catalyst Community Developments.

Ibarra said the idea is to open up the conversation so everyone involved in the debate has the same access to information and understands all the shades of the issue.

“Brightside thinks we need to, as a city, look and acknowledge the different challenges faced so we can come together and solve this issue. This is going to also help create more support from the entire city,” she said, adding both short- and long-term solutions are needed.

“The temporary modular housing is great. It’s responding to a crisis, an immediate need, but it’s not a long-term solution. Long term is key. We need to facilitate and incentivise the building of affordable family rental units because they are notoriously difficult to make financially viable. Incentives to build are very important.”

While she said it’s important to protect the existing affordable rental stock, the reality is much of it is old and not in very good shape.

As a result, according to Ibarra, there needs to be room to redevelop, increase density and create homes appropriate for people such as seniors, while also figuring out how to temporarily relocate displaced tenants while adequate buildings are constructed.

Supply remains an issue, she said, because very little affordable rental housing has been built over the past decade.

Although more below-market units have been delivered recently, and more are in the pipeline, Ibarra said there are still not enough to address the needs of seniors, families and people with disabilities.

She said reducing permit times or permit fees, for instance, might make affordable housing projects more financially viable and, as a result, help keep rents down.

Ultimately, Ibarra said affordable housing solutions can be reached through education and dialogue, and the Brightside event will give community-based organizations and individual renters an opportunity to hear from people they might not otherwise be exposed to such as Hutniak and Atkey.

For her part, Wilder hopes to see more affordable housing in the near future.

“I hope we stop passing the buck and we start doing something,” she said.

Brightside’s Oct. 9 event runs from 5:30 to 8:30 p.m. at VPL’s Alice Mackay Room. It’s free and open to the public. Registration is required. More information can be found HERE.

After the forum, participants will be asked for feedback on what they would like to see focused on in terms of finding housing solutions. The feedback will be summarized and made public.