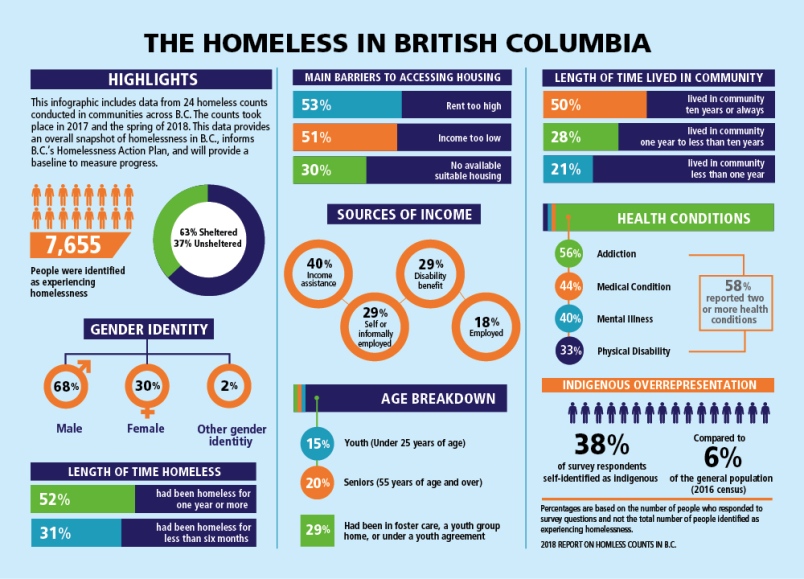 The first comprehensive count of homeless people in B.C. has found that more than 7,600 people in the province do not have a place to call home.

Of those, 1,884 are on Vancouver Island and Salt Spring Island. Greater Victoria’s homeless population is pegged at 931.

The figures were gathered to provide a foundation for governments and social agencies as they try to deal with homelessness.

Details of a homeless action plan will be announced by the province in early 2019 as part of its poverty-reduction strategy.

Shane Simpson, minister of social development and poverty reduction, said: “Many people ­living on the street are struggling with challenges that are intensified through their experience of being homeless.

“You can’t live on the street and not be affected both mentally and physically by the constant ­struggle.”

B.C. is planning to work with other levels of government and community agencies to provide a range of supports, he said. There will be a focus on early intervention to prevent homelessness in the first place.

Many of the 7,655 individuals surveyed said housing is difficult to find because their low incomes mean they cannot afford high rents and there’s nothing suitable in any case.

High-profile tent cities and political action calling for more services have highlighted the issue in recent years. On Vancouver Island, tent cities have been established and dismantled in Victoria, Saanich, and just days ago in Nanaimo. The provincial government set up two modular housing projects in Nanaimo to provide about 160 beds for homeless people, many from the tent city.

This year’s survey of 24 communities was largely a point-in-time endeavour, with counts taken at shelters as well, said the 2018 Report on Homeless Counts in B.C. The report was prepared for B.C. Housing by Homelessness Services Association of B.C., Urban Matters, and B.C. Non-Profit Housing Association. Federal funds also supported the ­survey.

Questions asked of homeless people illustrate the issues facing this population. One figure paints a bleak picture. Most respondents — 74 per cent — were alone.

Among those counted, 219 were under 19 years old and were with a parent or guardian.

Seniors (55 and older) account for 20 per cent of the homeless population.

Men made up 68 per cent of those surveyed, women 30 per cent, and two per cent identified as another gender.

A total of 38 per cent were Indigenous.

Health issues are common. The report found 56 per cent of the people surveyed reported an addiction, 40 per cent said they had a mental illness, 44 per cent had a medical conditions, and 33 per cent had a physical disability. As well, 58 per cent had two or more health conditions.

A total of 29 per cent said they had been in foster care, a youth group home or under a youth agreement. The report said that 51 per cent of everyone surveyed became homeless for the first time when they were younger than 25.

Celine Mauboules, executive director for the Homelessness ­Services Association of B.C., said the new report “is an important step to understanding and addressing the needs of our most vulnerable citizens.”

The total number of homeless people in B.C. is believed to be higher, the report said. Some ­people preferred to stay hidden, living deep in the woods or in abandoned buildings, where they could not be found.

The report puts Nanaimo’s count at 301. But agencies in Nanaimo have put the number at 335, and one social organization figures it is really about 500.

The report acknowledges the difficulty in coming up with exact figures. “We were not able to find everyone and not every individual experiencing homelessness wanted to be surveyed.”