The Province: At least 681 youths are homeless according to Metro Vancouver count

Jennifer Saltman / The Province / October 5, 2018 (with mention of BCNPHA)

The count, the first of its kind, was conducted in April over nine days and found at least 681 people aged 13 to 24 homeless in the region.

At age 16, Dylan Cohen experienced homelessness for the first time.

He was living in Manitoba and had been in foster care for three years before “inadequate” foster placements pushed him to homelessness.

“It was traumatizing,” he said of the experience, which saw him couch surfing and staying in shelters. “I was without my family. I was without my sister. I was completely away from my community.”

Cohen, who is now 23 and a youth organizer with Fostering Change, is not alone.

According to the results of the first-ever youth homeless count conducted in Metro Vancouver, which were released on Thursday, at least 681 young people are experiencing homelessness across the region.

Two-thirds of respondents, like Cohen, ended up homeless for the first time at age 16. 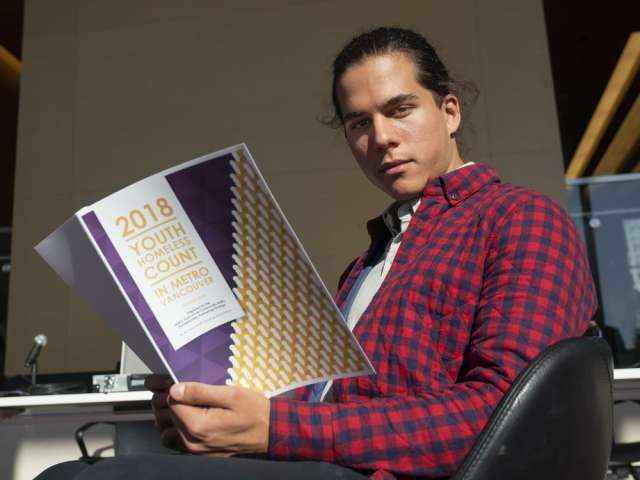 The count was conducted by the B.C. Non-Profit Housing Association on behalf of Metro Vancouver over nine days in April. Data was gathered through surveys conducted at youth centres, high schools and shelters, and through client spreadsheets filled out by youth service providers.

The idea was to address the hidden conditions of homeless youth and get a better idea of the extent of youth homelessness than could be had from a traditional 24-hour, point-in-time count.

“This research gives us better insights into why kids become homeless, how homelessness affects them, and how service agencies can better assist them,” said Lorraine Copas, chair of the Metro Vancouver Homelessness Partnering Strategy Community Advisory Board.

The report showed that of the 681 youths who were found to be homeless, 349 were living in Vancouver, 106 were in Surrey and 64 were on the North Shore. These areas accounted for 76 per cent of youth experiencing homelessness in the region.

More than half are between the ages of 19 and 24, 34 per cent are between 13 and 18, and the rest were under age 13. Most of these young people were living on their own, while 38 children were with a parent or guardian.

Most respondents were couch surfing (37 per cent), staying in a shelter, safe house or transition home (33 per cent), detox centre or recovery house (two per cent) when they were surveyed. Twenty-six per cent were staying outside, which includes in vehicles, a makeshift shelter or tent, or a vacant or abandoned building.

More than half of youths said family conflict was a reason for becoming homeless, 41 per cent listed drugs or addiction and 33 per cent said they had challenges with mental health. Half of those surveyed are or were previously in foster care; 11 per cent became homeless after aging out of care.

About 44 per cent of youth had been homeless for a year or more. High rent, low income and mental health challenges were considered the top three barriers to housing.

The results showed that Aboriginal or Indigenous, and LGBTQ2S youth were overrepresented among the homeless population.

A high proportion (42 per cent) of youth identified as Aboriginal or Indigenous, and about 75 per cent of those respondents were more likely to become homeless under age 19, compared to 67 per cent of non-Aboriginals.

“If anything, this issue is going to get worse if we don’t do anything about it,” said David Wells, chair of the Aboriginal Homelessness Steering Committee.

“We do know that family conflict is one of the largest contributing factors, but that can be further broken down into homophobia, transphobia, bullying within schools,” said Jennifer Hanrahan, director of operations and residential services at St. Leonard’s Youth & Family Services.

As with all homeless counts, the youth report is considered to be an undercount.

“Youth are highly underrepresented in these reports,” said Hanrahan. “The methodology for this report was the first of its kind in terms of it spanning over nine days, however what I do know is there’s a lot of youth that go undercounted over nine days.”

Those who can slip through the cracks are youths who are precariously or inappropriately housed, those who are afraid to access services, or those who are not homeless at the time of the count but are experiencing episodic homelessness.

Because it is the first of its kind in the region, the count is meant to establish a baseline for youth homelessness in Metro Vancouver, and provide another tool for advocates to use when lobbying governments for support.

“I believe that this report has been a step in the right direction toward figuring out how we can tackle this issue across the region and help us to better collaborate,” said Joanne Mills, executive director of the Fraser Region Aboriginal Friendship Centre Association.