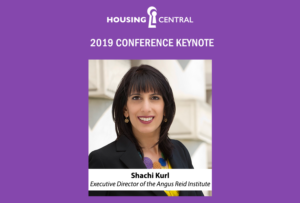 Housing is the biggest expense for most Canadians, with a significant portion of the population spending 30% or more of their income on shelter costs. It’s no surprise, then, that affordable housing emerged as a key issue in the Canadian federal election, along with other leading issues such as healthcare, climate change, and transparency in the government.

In Vancouver, there remains an ongoing sense that housing prices are hurting residents, and that a plan for action should be implemented to combat their rise. The Angus Reid Institute noted that over 40% of metro residents said they’re feeling the pain personally, whether it’s in their inability to access the housing market, the housing costs in general, or housing costs in combination with transportation issues. Older residents who got into the market early and feel less pressure are voicing their concern for the next generation, and as a whole, the majority of residents consider the housing costs to be unreasonably high—62% would like to see prices fall. Outside of urban areas like Vancouver and Toronto, more than half of Canadians agree that the prices in their neighborhoods exceed what’s reasonable. In general, most Canadians would like to see government intervention in the real estate sector.

Election night saw the Liberals manage to hold onto a minority government, the result of many Canadians making a head-over-heart decision and casting their ballot strategically. While the Conservatives may have won the popular vote, the overall electorate chose more direct government intervention rather than the boutique tax cuts and other incentives the Conservatives offered in their platform. What does this mean for the Liberals? The loss of power means the party will have to work closely with the NDP on a housing strategy —though they could also look to other parties for support—while the election result overall exposes fissures across the country in age demographics, regional differences, and a split between urban and rural areas. Whatever housing mandates Justin Trudeau and the Liberals attempt to implement will have to include a way to reach across this deep divide.

As Executive Director of the Angus Reid Institute, Shachi Kurl can be found offering analysis on CBC programs, in the Globe and Mail, the National Post, and other influential forums. At the Institute—one of North America’s premier non-partisan, non-profit research and public opinion polling organizations—she works to further public knowledge, debunk myths, and contribute to debate and discussion in meaningful ways, enhancing the understanding of issues that matter to Canada and the world. She brings nearly two decades of public policy expertise to her role, spending the first part of her career as a political reporter. Hear her speak on Monday, November 18th, at the #HousingCentral Conference. More than 1,100 people have already registered – secure your spot now at conference.housingcentral.ca!