I Am My Sister and Brothers Keeper by Tracee McDaniel 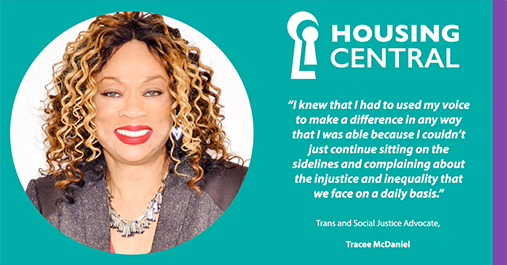 Our members provide safe, secure and affordable homes. Below is a sneak peek of what Trans and Social Justice Advocate, Tracee McDaniel will be sharing at the 2018 Housing Central Conference.

I’ve been asked, “Why do you advocate for Transgender people, when you are able to “Pass” and blend into society without telling people you are Transgender?”

My response has remained to acknowledge my “Passing Privilege”, which just because I haven’t experienced the typical discrimination that most people face in their daily lives, doesn’t mean that I have the privilege of ignoring the systemic discrimination, marginalization and violence that our community experiences.

I also believe that being born in South Carolina during the height of the Civil Rights Movement has contributed to my determination to fight for the underdog and marginalized.

According to the Transgender Law Center, “One in five transgender people has experienced homelessness at some time in their lives because of discrimination or family rejection.

Transgender people facing homelessness also face discrimination from agencies that should be helping them, with nearly one in three (29%) reporting being turned away from a shelter. One in five transgender people (19%) in the United States has been refused a home or apartment, and more than one in ten (11%) have been evicted, because of their gender identity.”

When I relocated back to Atlanta from Los Angeles, California in 2003 I was living what I thought to be a golden life being a performance artist entertaining in local TLGB venues at night and also living a heterosexual experience during my daily life.

Although I’ve never denied or tried to hide my gender identity, I’ve never spoken out publicly about being a Trans woman until becoming outraged and appalled after learning that trans and gender non-conforming people were being denied access to public shelters.

I knew that I had to used my voice to make a difference in any way that I was able because I couldn’t just continue sitting on the sidelines and complaining about the injustice and inequality that we face on a daily basis.

I established Juxtaposed Center for Transformation in 2006 to be my vehicle to advocate for my community and find solutions for not only this issue.  I also wanted to find solutions for the other challenges that we face including healthcare, unemployment and the violence that’s perpetrated against us on higher levels as compared to our LGBQI community members.

Later in 2014, a group of community stakeholders came together after a series of Town Hall meetings to address the homelessness in our community which gave birth to Trans Housing Atlanta Program. THAP provides emergency assistance homeless people and those at risk of losing their housing.

In 2018 THAP filed a grievance with the Atlanta Human Relations Commission against Salvation Army and received a favorable ruling that the Salvation Army was discriminating against Trans people based upon their gender identity, which contributed to staff and policy changes within the Salvation Army.

I will continue to use my position serving on the Atlanta Citizen Review Board and Atlanta Mayor Keisha Lance Bottom’s TLGBQI Advisory Council to show up and participate for equality, justice, human and civil rights protections for Trans people.