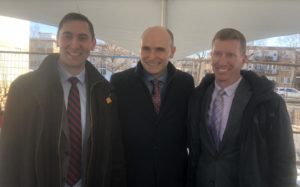 The partnership is represented by an organization incorporated last year which will oversee the project.

“BC’s non-profit housing providers and housing co-ops welcome this initiative,” said Jill Atkey, CEO of the BC Non-Profit Housing Association. “By directing this investment through community housing organizations, the federal government is recognizing the established track record, knowledge and efficiency of the community housing sector.”

“Canada’s housing co-ops and sector organizations are very proud to be involved in this important initiative,” said Tim Ross, Executive Director of the Co-operative Housing Federation of Canada. “As housing need becomes more pressing by the day for many households across the country, we are ready to engage with government and organizations to ensure resources are best deployed to make community housing, including co-op housing, more resilient.”

“Quebec’s non-profit housing groups are excited to be part of this innovative project,” said Stéphan Corriveau, Directeur général of the Réseau québécois des OSBL d’habitation. “This arrangement will help us best direct this needed funding to the specific housing needs and circumstances of different regions.”

Formed 26 years ago, BCNPHA is the industry association for the social housing sector in BC. It represents, educates and provides service to more than 700 non‐profit housing providers that operate more than 65,000 units of long- and short‐term affordable housing across the province.

CHF BC is a co‐operative association made up of member housing co‐ops and related organizations in BC. The association represents 264 co‐op communities (comprising more than 14,500 households) across the province.