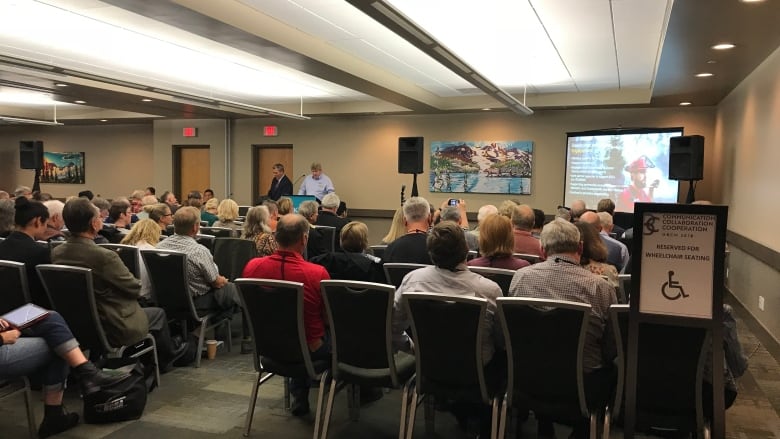 Forums at the 2018 Union of B.C. Municipalities convention are attended by dozens of local politicians from across the province. (Justin McElroy/CBC)

Endorsing a registry for numbered companies one of the many items to be discussed during annual conference.

Unsurprisingly, the first day of the 2018 Union of B.C. Municipalities (UBCM) convention was filled with discussions about the price of housing, and what local governments could do to lower it.

“We believe that there’s not a silver bullet to the housing issues that are out there,” said Chilliwack Mayor Sharon Gaetz, emphasizing one of the themes of the conference — that reversing the trend of unaffordable housing wouldn’t come from one policy but a wide range of policies at both the local and provincial level.

Gaetz made her comments after announcing the UBCM would be submitting a new request to the provincial government, calling on it to work with municipalities to publish aggregate data on pre-sales and identify additional data needs and actions to address tax avoidance in real estate.

“Right now in housing, there’s lots of shell companies, numbered companies and blind trusts that are able to hide ownership, and we think that the data of knowing who owns the homes will really help us in determining our policy,” she said.

The provincial government has said a registry on numbered companies is coming, but the exact details won’t be known until next legislative session.

Gaetz’ announcement was followed by a forum on housing called “Achieving Affordability: Current Policy and Future Needs,” where delegates heard about strategies they could use to increase housing supply in their municipalities.

Examples included contributing public land, zoning existing and new rental developments as rental-only housing, reducing permitting times for affordable rental housing and pursuing partnerships with local-non profits — regardless of how big the municipality in question is.

“There are other communities that are struggling with the issue, even more than Vancouver, once we factor in incomes.” said presenter Jill Atkey, CEO of the B.C. Non-Profit Housing Association, who said six of the top 10 municipalities for percentage of renters spending over half their inco​me on shelter were outside Metro Vancouver.

“Overspending on rent is really becoming the new normal in our province.”

​She also suggested an average of 7,000 units for renters would need to be built annually over the next 10 years, requiring $691 million in annual provincial government funding.

Delegates will debate several resolutions on housing during the week, including one by the City of Vancouver that addresses skyrocketing property taxes for small businesses when land is assessed at higher value because of new community plans that allow for higher density.

“They could [make] those changes relatively quickly.”

Another resolution concerns the speculation tax, calling on the provincial government to allow local governments to opt in or out of the measure — including areas of the province where it doesn’t apply.

“I’ve heard concerns. We have communities that don’t want to be part of the tax, and we have ones that do,” said Mid Island-Pacific Rim MLA Scott Fraser, who said Tofino would likely benefit from more ability to levy taxes on vacant and short-term vacation properties.