It’s the first election campaign in B.C. with housing affordability at the forefront — unless you count the last provincial election.

Or the one before that. Or municipal elections all over B.C. three years ago.

“I think we’ve been at it since 1886, since the settler founding of this fine city,” said Andy Yan, director of SFU’s City Program.

“It’s interesting to see this come across the country, it isn’t just within Metro Vancouver and Toronto, but that it’s an issue that touches people at home, to get a home.”

More so than recent federal elections, the main political parties have made housing a central part of their platforms, as property values and local incomes become decoupled in more areas across the country.

But in British Columbia, where many years of concerted effort haven’t made housing more affordable for most, there is some skepticism that any of the promises will quickly change things.

“The good news is this is the first election where I can remember each of the parties has a really thought-out and meaningful contribution to make,” said Jill Atkey, CEO of the B.C. Non-Profit Housing Association.

“There’s a combination here of older tested methods and investments, and trying new things because we’re in the midst of a crisis.”

Too much focus on owning?

Both Atkey and Yan say there are commendable things in each of the main political parties’ platforms — which you can find here and here — including the NDP’s focus on affordable housing, the Conservatives tying transit funding to density, and the Liberals’ focus on housing for Indigenous and marginalized communities.

Both argue there is a focus on home ownership policies at the possible expense of paying sufficient attention to the rental market, particularly in the Liberal and Conservative platforms.

“We’re seeing … a real emphasis on getting people into home ownership, and so there’s various boutique options available for people,” said Atkey.

“I think in large urban centres in this country, we’re at the point where unless young Canadians have intergenerational wealth transfer or inherited wealth, they have been priced out of the market, and they’re taking a real close look at rentals.”

“Over the last five years, there’s been, across Canada, 980,000 housing completions. It’s been above average in terms of the production of housing,” said Yan.

“The problem is, we’ve seen tremendous pressures upwards in terms of mortgages and values and rents.”

There’s also the question of whether that supply can even get built.

“The senior orders of governments are limited. They can provide funding, they can provide incentives, but fundamentally the homes get approved in municipalities,” said Darlene Hyde, CEO of the British Columbia Real Estate Association.

“It requires the participation and the cooperation of all three orders of government … we’ve all got to get on the same page here.”

Atkey was recently on an expert panel formed by the federal and B.C. governments to look at housing supply and affordability, which issued 23 recommendations for all levels of government to consider.

She hopes that whoever emerges victorious from the campaign continues to talk about housing as much in government as they do on the campaign trail.

“We’ve had various levels of government making commitments, but they’re not always aligned on those commitments, and without those sustained commitments and investments, I’m not sure we’ve hit bottom yet,” she said.

“We’ve said for some time it’s going to get worse before it gets better. We cannot dig ourselves out of this crisis overnight.” 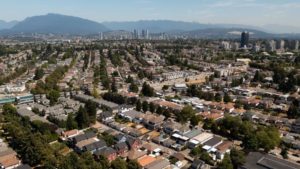