Business In Vancouver: B.C. Premier applauded for headway made on housing 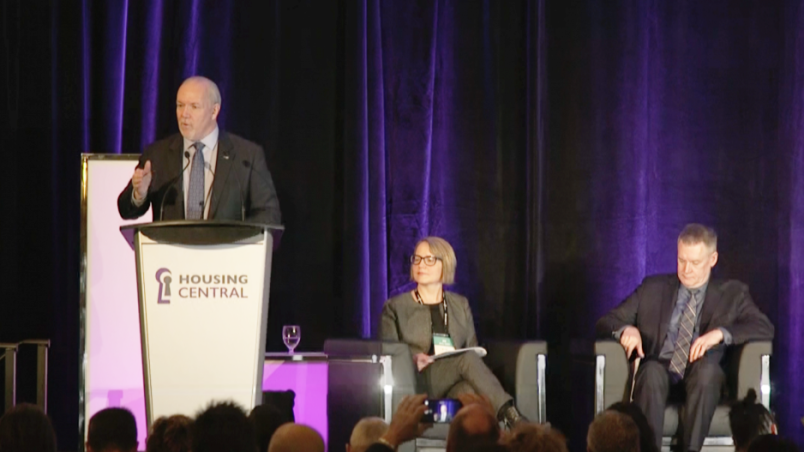 Hayley Woodin / Business in Vancouver / November 18, 2018 (with mention of BCNPHA and Housing Central)

“I’m very pleased with what we’ve been able to accomplish in the first 16 months,” the premier told a packed ballroom at the Sheraton Wall Centre Sunday morning.

“We’ve taken major steps to deliver on the commitments that we’ve made.”

The premier had many housing highlights to share from his government’s first 16 months in office; a string of announcements guided by a 30-point plan, and funded through a $7 billion investment to address housing needs in British Columbia over the next decade.

“Housing is a fundamental crisis at this point in time,” said Horgan.

“It’s not just the hard-to-house. It’s also creeping into middle class and those with moderate incomes,” he added. “When I talk to employers, they say: make sure that we have a place for people to live so that when we recruit and attract people to British Columbia, they’re not turned away by the dollar signs on the housing or the ridiculous inability to find a place to rent.”

Around a thousand stakeholders, civil servants and community housing sector representatives registered for day one of the annual Housing Central Conference, presented by the BC Non-Profit Housing Association (BCNPHA), in partnership with the Co-operative Housing Federation of BC (CHF BC) and the Aboriginal Housing Management Association (AHMA).

Sunday through Tuesday, some 1,500 attendees — largely from British Columbia’s community housing sector — will choose between more than 120 keynotes and discussions on a wide range of housing-related topics, from legislative changes and capital planning, to inclusive housing and homelessness.

Sunday morning, they heard no new commitments from the premier or B.C. housing minister Selina Robinson. Both re-affirmed the provincial government’s commitment to building homes across B.C. through partnerships. Both took the opportunity to share with a very welcoming crowd how the NDP has begun to tackle housing accessibility and affordability issues.

In February, finance minister Carole James tabled the NDP’s first full budget, and along with it, a 30-point housing affordability plan. While many of the points are ongoing objectives, government has launched a number of them over the last nine months, including a hike to B.C.’s foreign buyers’ tax, changes to the property transfer tax and school tax rates on homes valued above $3 million and the launch of HousingHub among them.

Last week, the province announced the first wave of homes to be built under the new Building BC: Community Housing Fund – a $1.9-billion, 10-year commitment to build 14,000 affordable rental units. The University of Victoria also became the second institution to access the government’s BC Student Housing Loan Program, which will enable the university to expand its on-campus housing by 25 per cent.

“We have a lot more to do, and the challenge is daunting,” said Horgan.

During her presentation, Robinson highlighted the work and priorities of several new funds – for supportive housing, community housing, indigenous housing and women’s transitional housing – which will in part distribute the government’s multibillion-dollar housing investment.

She also repeatedly thanked and applauded delegates and government partners for their work over the past year and a half, and with the previous provincial government.

“How long has it been since we had a premier or a housing minister here at a Housing Central Conference opening? And this morning we have both,” said Thom Armstrong, executive director of the CHF BC.

“I can say I have never been more excited to be part of the community housing sector than I am now.”