Rosemary Brown broke through racial barriers and the glass ceiling, making her mark in politics and human rights and leaving behind an inspiring legacy of achievement. Her work has helped ensure equal rights for women and people of colour, whether it’s in our schools, workplaces or homes. 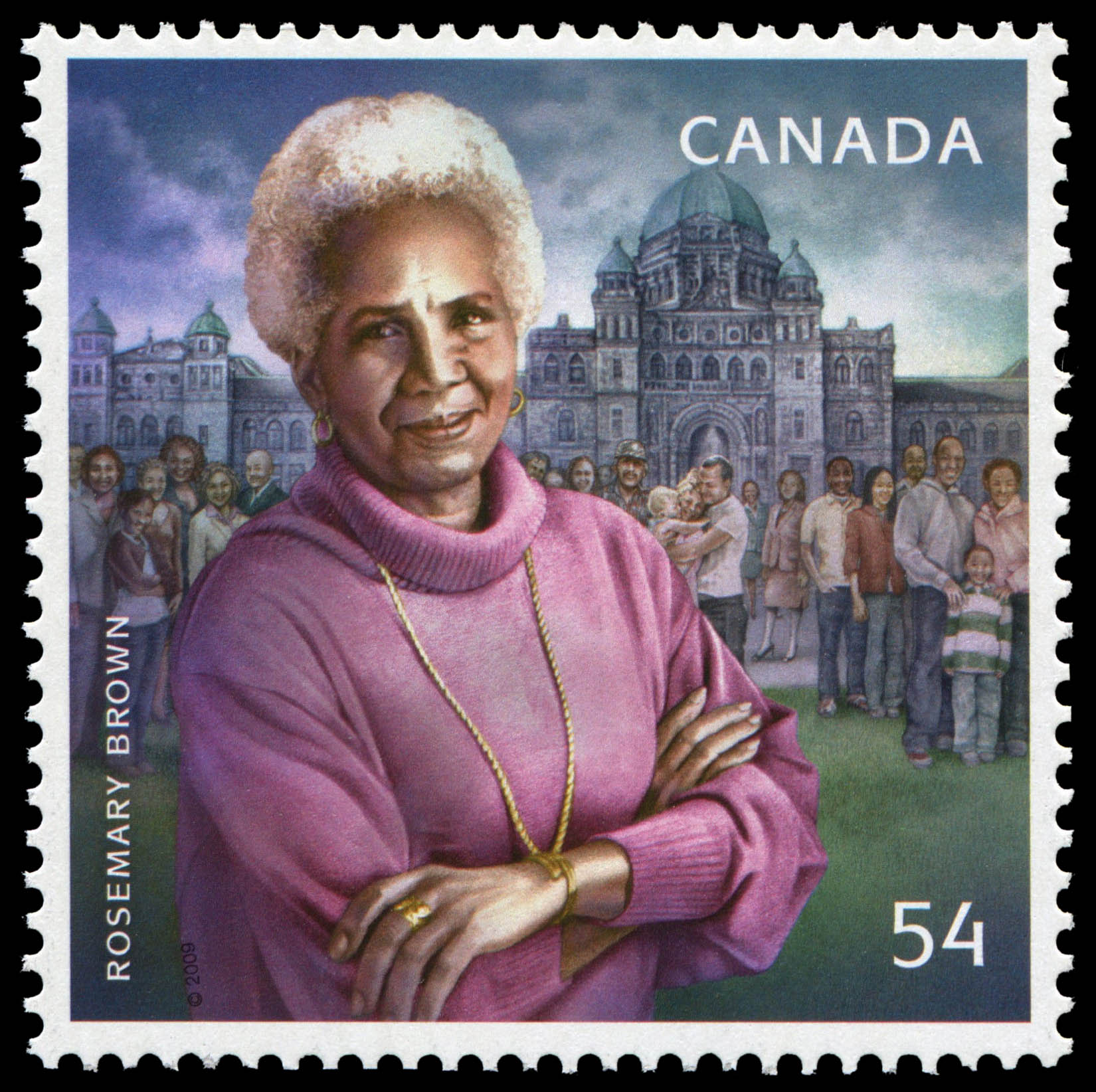 In 2009 a commemorative stamp recognizing Rosemary Brown was unveiled

An inspiring story of breaking glass ceilings, Rosemary Brown has the distinction of being Canada’s first Black female member of a provincial legislature and the first woman to run for leadership of a federal political party. Calling public life “a tough arena” for women, Brown nonetheless encouraged women to enter politics and bring about change for their communities and the world.

Rosemary Brown was born in Jamaica in 1930. She moved to Canada in 1951 to attend McGill University and to British Columbia in 1955, where she completed a graduate degree in social work. Brown’s early years in Canada marked the beginning of a life-long determination to eliminate the barriers that minority groups faced within Canadian society.

Brown was employed as a social worker and university counsellor in the 1960s, a time when both women and Canadians of African and Caribbean ancestry were struggling for equality and better representation in public life. During this time, she was also a founding member and Ombudswoman of the Vancouver Status of Women Council.

Brown was one of the first Canadians to talk about intersectionality, the theory that different aspects of one’s social identity (e.g. race, gender, sexual orientation) can combine to create unique forms of discrimination. Intersectionality is the best available framework for understanding complicated social issues because it recognizes diversity within social groups from the outset. In other words, it embraces complexity where other schools of thought may oversimplify for expediency.*

Brown ran successfully in the 1972 provincial election as the New Democratic Party candidate in the riding of Vancouver-Burrard, becoming the first Black woman elected to a provincial legislature in Canada. She was re-elected three times, serving until 1986.

As an MLA, Brown introduced legislation to remove sexism and racism from the BC education curriculum, to reduce discrimination based on gender and marital status, and to advance human rights in the province.

Following her retirement from politics, Brown was a professor of women’s studies at Simon Fraser University, named to the Canadian Security Intelligence Review Committee for a five-year term, and was Chief Commissioner of the Ontario Human Rights Commission from 1993-1996. She became a writer and professional speaker, a passionate voice for human rights and the rights of women from around the world.

To close, we leave you with her quote:

“To be black and female, in a society which is both racist and sexist, is to be in a unique position of having nowhere to go but up.”