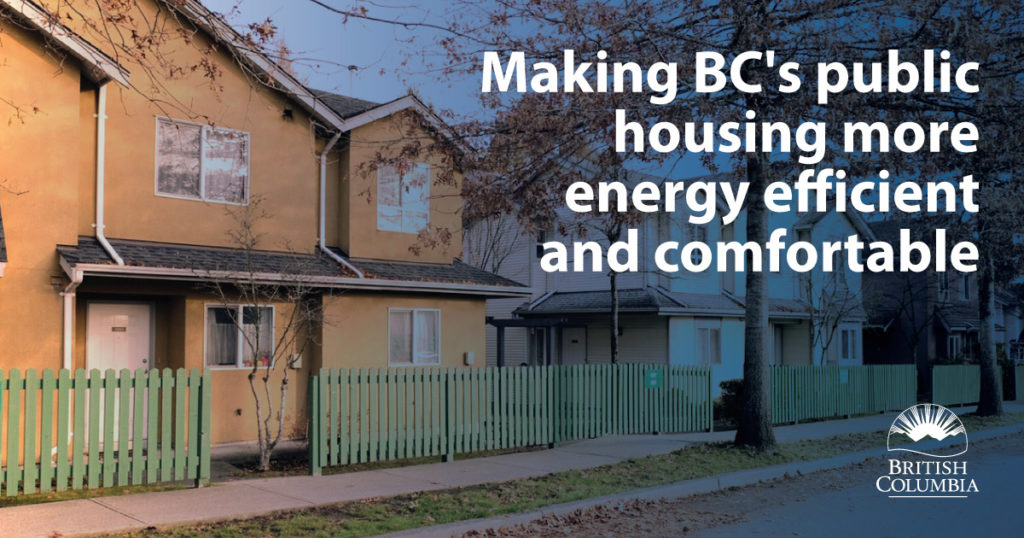 In making the announcement, Premier John Horgan said the major focus of the retrofit initiative will be to increase the use of cleaner electricity in the province’s 51,000 units of publicly funded and owned social housing. As a result, some buildings may reduce greenhouse gas emissions by more than 50%.

“As part of tackling climate change here in B.C., we need to change how we heat our homes,” Premier Horgan said. “By retrofitting the homes of tens of thousands of British Columbians, we’ll reduce air pollution at the same time we’re reducing people’s heating bills.”

The $1.1-billion retrofit initiative is part of the B.C. government’s 30-point housing plan, released in the last provincial budget. Within this, the energy-efficiency component is budgeted at $400 million and is part of government’s upcoming strategy to meet B.C.’s legislated climate goals. It will include upgrades that improve building efficiency and reduce energy use – like boiler and electrical upgrades, replacing doors and windows, building-envelope repair, electrical upgrades and more.

“This investment is a great example of how reducing emissions improves quality of life and affordability for British Columbians,” said Andrew Weaver, MLA for Oak Bay-Gordon Head and leader of the B.C. Green caucus, who joined Premier Horgan in making the announcement. “Making our buildings more energy efficient will also provide opportunities for the trades and construction industry to develop their expertise in low-carbon solutions. Creating these kinds of opportunities will help drive local innovation that will benefit the entire provincial economy.”

In addition to the efficiencies created, the broader retrofit initiative will deliver significant seismic and fire-safety upgrades, making homes safer and more comfortable for residents. It will also create approximately 7,700 direct and indirect B.C. jobs.

“B.C.’s social housing is a critical piece of solving the housing crisis we’re seeing in all parts of the province,” Premier Horgan said. “In addition to building more housing, we must take better care of the homes we have already. This is an investment in the families and seniors who live in social housing. It’s an investment in their safety, comfort and ability to afford the homes they want.”

Residents of Victoria’s Ashlar Manor, a 49-unit building for low-income seniors and persons with disabilities, attended the announcement. It is anticipated the upgrades to that building will reduce greenhouse gas emissions by more than 50%.

“Renovating existing affordable homes is an overdue investment in our future and offers significant opportunities to upgrade seismic, life safety, accessibility and energy performance. What this means for tenants is they have a better quality of housing at a rent they can afford.”

“By ramping up funding for renovations and retrofits, we’re making thousands of units more comfortable and more efficient, while cutting our carbon pollution. We’re also helping people to lower their bills and make their homes more comfortable. It’s a win-win that helps us to build new skills, invest in people and make our communities stronger.”

“The CRHC is pleased to see the direct benefit the retrofit funding will provide for the residents of Ashlar Manor and across the province. It will allow for the continued provision of affordable housing into the future, while increasing building safety through seismic upgrades and the reduction of greenhouse gas emissions.”

“Decades of unfunded liabilities in the community-housing sector mean that our existing supply of affordable housing is at risk. This much-needed infrastructure investment demonstrates that government understands existing homes are as key to solving the affordability crisis as investments into building new homes. Fortunately, they’re doing both.”

“All British Columbians deserve to benefit from healthier living and work spaces, lower heating bills and less pollution. This investment in affordable, safe, energy efficient and low-carbon homes for some of our most vulnerable people is a positive step forward for B.C. It will also stimulate innovation in the retrofit market, making it easier to upgrade the rest of the housing stock. Preparing all of our existing homes and buildings for the clean future will be B.C.’s next mega-project, creating jobs in all communities.”