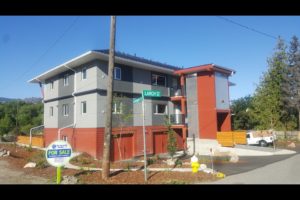 Nexbuild Construction has been trying to change the conversation around efficient, sustainable buildings and their efforts were recognized last month, finishing second in the Reframe Housing Competition.

The local company was one of three Kamloops businesses to win the contest, put on by Urban Matters CCC and the B.C. Non-Profit Housing Association (BCNPHA). Nexbuild came second in the Active Housing Innovation category, while local startups ExpanDwell Homes Inc., and Dwell In were co-winners in the Idea/Creation category. Winners were announced at the BCNPHA’s Housing Central Conference on Nov. 17.

“We’re basically just trying to build the best product for, not just the occupant and buyer, but for society and then make a market case for it,” says Miles Pruden, owner of Nexbuild. “If we can find a way to do that, I think it can make a profound difference.”

The second-place finish came with a $5,000 prize, money Pruden says they’ll put toward researching a new wall system that will reduce the cost of homes and improve durability.

The competition sought innovations in the affordable housing space and for his application, Pruden says he basically outlined Nexbuild’s entire business model.

“Our submission was basically our strategy, which is mainly to make affordability and efficiency our first priority in designing our buildings,” he says. “Then we design the rest around that. If you want to build sustainable affordably, you have to design within physics. An example would be minimizing the number of windows, but place them in a way so you still get enough light, that sort of thing. It’s easier to design your living space around that than design efficiency around a living space.”

Pruden bought Nexbuild last year and they built their first sustainable development in the spring. Now living in one of the units to monitor its performance, he says they’re on track produce more electricity than they use.

The other winners are still a little ways from having tenants benefit from their ideas. ExpanDwell is working on designs for an easily transportable pop-up house that can not only be used recreationally, but can serve a function in emergency situations.

Meanwhile, Dwell In is a website designed to help landlords and renters improve their connectivity by “simplifying the application and selection process, enhancing transparency, and building trust.”

Both companies received a $2,500 prize and will be aided by Urban Matters as Dwell In looks to go to market and ExpanDwell develops a prototype of their unit.